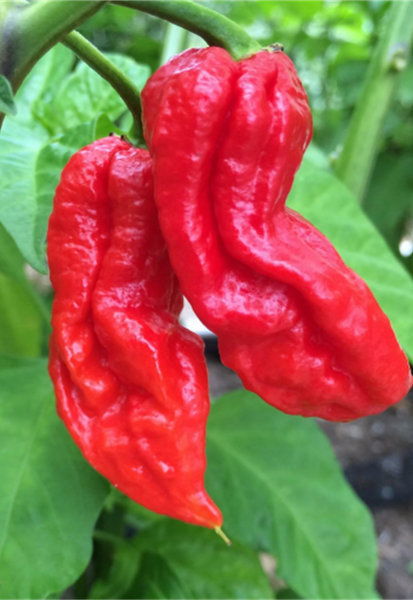 GHOST PEPPERS are originally from India, this pepper was introduced as the world's hottest pepper in 2006 beating out the Red Savina Habanero for the Guinness World record book. This pepper has since been dethroned by the Carolina Reaper but testing at over 1 million Scoville units this pepper is nothing to underestimate! Known for a sweet and fruity flavor that quickly turns to an intense burn 30-45 seconds in. Ghost peppers come in a variety of colors that have their own unique flavor and heat profiles.

Bhut Jolokia Red, known as Red Ghost Pepper. This legendary variety is one of the world’s hottest peppers, with readings in excess of 1,000,000 Scoville units! Red Ghost Pepper plants grow to over 4 feet tall in  favorable condition, The thin-walled,wrinkled, pointed fruits reach 2-3” in length and ripen mostly red has a very fruity flavor that kicks in almost immediately after consumption. The extreme heat builds up for several minutes and eventually creates a powerful endorphin rush.  1,000,000 SHU

CAUTION: These peppers are extremely hot. It is the responsibility of the buyer to ensure the safe cultivation and consumption of these peppers.

Super Hot Pepper Care - Plant Super Hot pepper plants in a full sun in well-draining soil. These pepper plants can be planted in the ground or in a large pot. Super hot peppers are heavy nutrient feeders, a regular watering and fertilizing schedule is recommended for pepper production. We recommend using a fertilizer with Cal-Mag to support flowering and fruiting super hot peppers. Avoid frost and overhead watering

Shipping is ONLY available inside California.

We require a one day advance for Curbside Pick-Up orders for the earliest pick-up time.

Shipping & Curbside Pick Up is ONLY available for Online Orders