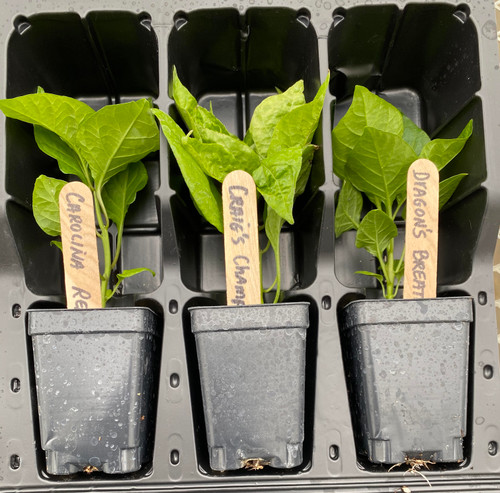 We have collected the top contenders for the World's Hottest Pepper here in our exclusive three pack plant collection. It includes Dragon's Breath, Craig's Champion and Carolina Reaper, all consciousness obliteratingly HOT!

This warty, red habanero hails from Nottingham, England, the mythical land of Robin Hood and dragons. Attractive 30" tall bushes produce 2 1/2" long x 1 1/2" wide peppers with a slight hook at the bottom. The fruit takes a long time to develop, at least four months, so be patient. Introduced in 2017, it has garnered the world's attention for the claim that it tested at an unofficial 2.4 million SHUs. Fact or fiction? We know not, but now you can be the judge by growing one yourself! We have been able to procure a limited amount of seed for 2020. Our first year offering this strain of pepper, we are excited to make it available exclusively in our exclusive collections. Plants will not be sold individually due to our limited supply.

Developed by Craig Drehmann at Redwood Seed Company in California, this fiery pepper has been laboratory tested at 1.662 million SHUs and submitted to Guiness for verification. We grew this pepper in our greenhouses the last two years. It is a vigorous, tall bush that produces brown (sometimes red to brown) 2" long peppers. While we wait for Guiness to decide who is the next official winner of the hottest title, you get to grow your own and decide for yourself.

The official World's Hottest Pepper since 2013, this bumpy pepper is a cross between a Naga Viper from Pakistan and a La Soufriere pepper in the Caribbean. The 2" to 3" long peppers have a distinctive hooked tail reminiscent of the scythe the Grim Reaper carries to collect the souls of the recently dead. In four months the fruit matures to a beautiful red with some green color bleeding into the fruit from the petiole. Reported to be potentially deadly

MSRP:
Was:
Now: $22.99
×
We only ship Mondays and Tuesdays, perhaps on Wednesday if your address qualifies for USPS Priority Mail one day shipping from Pomona. For more infomation please check out our shipping policy. We only ship within California, no exceptions no matter how much you plead and cry.